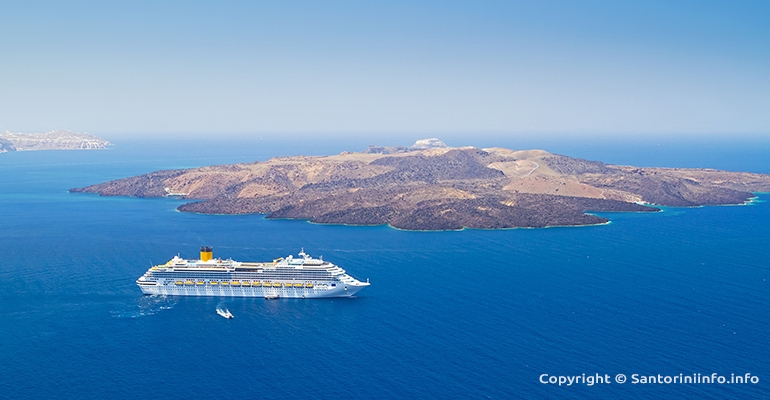 The volcanic complex of Santorini includes both volcanoes of the Old and New Kameni and a submarine volcano, Kouloubo, 3.5 miles Northeaster with deep crater 500 m. Approximately.

One of the most popular attractions in Santorini are the volcanic islands in the center of the caldera, where you can go with excursion boats. There you will climb to the crater of the volcano and swim in the waters of the hot springs.

100.000 years ago, the south part of Caldera had been created by a large eruption.
The eruption of 1600 BC created the north part
In 46-47 AD the eruption created the Palea Kameni.
In the summer of 726 AD many in number violent explosions, ejected pumice and volcanic ash several kilometers high scattered in the Aegean and Mikra Asia.

In 1570 AD the volcano became active again. The action lasted three years and the emergence of a large quantity of magma created the Little Kameni.
In 1707 and for the next four years there have been successive eruptions and phenomena that led to the emergence of Nea Kameni.

The Association of Small and Nea Kameni: 1866-1870
The explosions between 1866 to 1870 created the George volcano forced the Small Kameni to join the largest Nea Kameni.