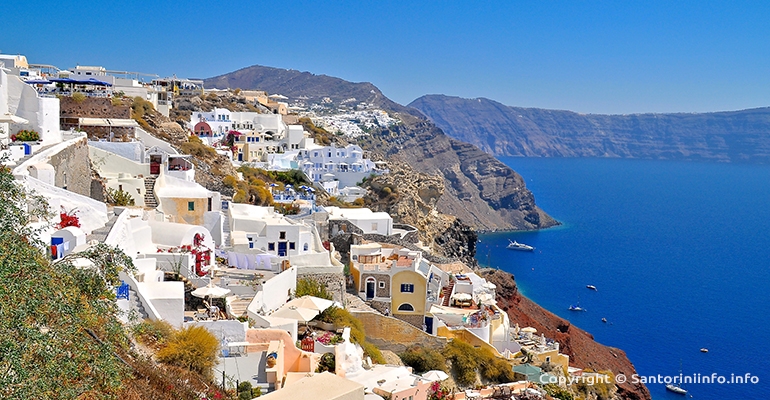 Santorini is one of the most exotic locations in the world. The island has a population of just a few thousand, but more than one million visitors come to enjoy this great geological wonder every year. Santorini is the southernmost island of Cyclades and is located between Ios and Anafi. It is 128 nautical miles away from the port of Piraeus and 63 nautical miles away from Crete. Its size is 76 square km and the length of its shores is 69 km. The perimeter is approximately 36 nautical miles.

The great crater formed by the volcanic eruption of around 1600 BC, adds to its distinct atmosphere: settlements are built on the edge of the crater's inner walls and not on the sea level, as in other islands. In addition, Santorini is one of the few places worldwide where architectural complexes of underground rock-hewn houses still survive inside the volcanic soil.

The Caldera and the whole cluster of the Santorini islands have been characterized as an area of outstanding natural beauty. Thera, Therassia, Aspronisi and the volcanoes (Palaia Kameni and Nea Kameni where the crater of the volcano exists) form the cluster of islands which is called Santorini. The main island, Thera, has a shape of a half moon and is located in the easternmost position of the cluster. The west side consists of the walls of the Caldera which preserve the picture of its geological history and illustrate the different phases of the volcanic activity. There are 13 villages in Thera and 3 villages in Therassia. The capital of the island is Fira. The name derived from corruption of the word Thera, which is the official one.