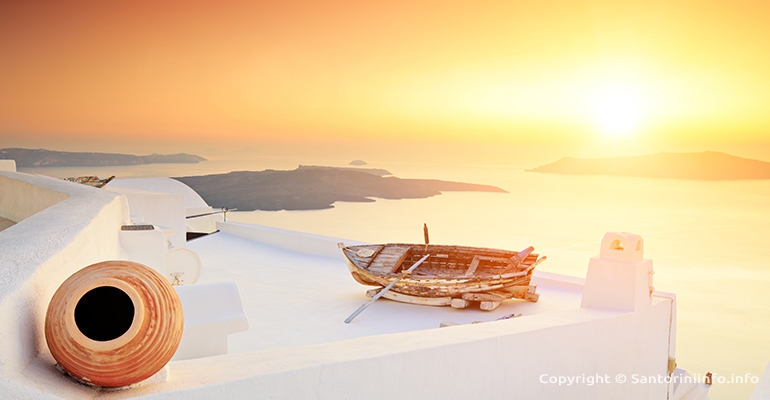 According to history, Santorini emerged from the depths of the sea- opinion which is justified by the timeless activity of the undersea volcano and the geological topography of the island. The island jealously guards its reputation as a possible location for the Lost City of Atlantis - the beautiful and mysterious island for which Platonas wrote in 350 BC.

The most important milestones in the history of Santorini

-Τhe first human remains, dating back to the Stone Age, showing that the island has been inhabited since the prehistoric times. There is some evidence of life in the early Bronze Age, in the mid-3rd millennium BC, during the second period of the early Cycladic civilization (2800-2100 BC). However, from the middle Bronze Age (1900-1600 BC), Santorini shows great development.
-1600 B.C. Destruction and devastation of Santorini and culture of Akrotiri.
-1300 B.C. Phoenician settlers came to the island and later Spartans settlers led by Thera. The island from Stroggili and Kallisti, which were the its oldest names renamed by the inhabitants “Thera”, to honor their leader.
630 B.C. The settlers from Thera Funded the African coast Cyrene and at the 8th century B.C. adopts the Phoenician alphabet along with Crete and Milos.
-After the Crusades Santorini granted to Marco Sanudo (1204) and was included in the Duchy of the Aegean. The Venetians were those that gave the name Santorini, corruption of Santa Irini (Agia Irene in Italian). Rivalries between the Latin conquerors and pirates plague Santorini.
-1579-1830 Turkish conquest: Residents of the island dealing with shipping and trade and create important communities throughout the eastern Mediterranean, since after the Treaty of Küçük Kaynarca (1774) agreed Santorini ships carry Russian flag and sail to the Mediterranean sea. Participating with their fleet in the revolution. In 1830 Santorini belongs to the new Greek state.
-In the following years there was a new growth path, since local production (tomato, wine and textiles) was growing rapidly.
-The 20th century throws Santorini in decline due to global wars. The devastating earthquake of 1956 destroyed once again the island's economy.
1980 The development of tourism brings back the boom and make Santorini one of the most popular tourist destinations in the world.